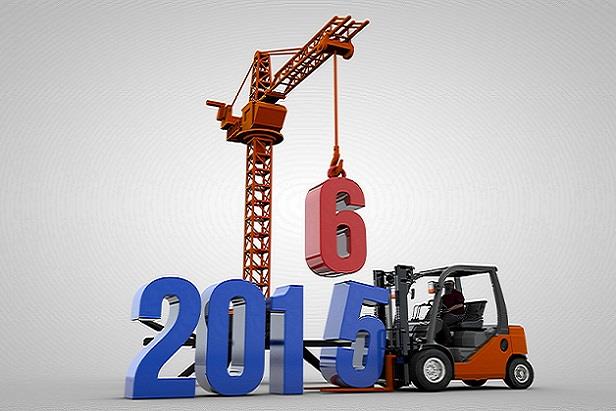 Dodge Data and Analytics recently released its 2016 Dodge Construction Outlook, which is a key resource for industry professionals across the US and helps drive sales forecasting and business planning efforts. The report predicts the recent resurgence will carry on unabated, with total US construction starts for 2016 expected to rise 6% to $712B. 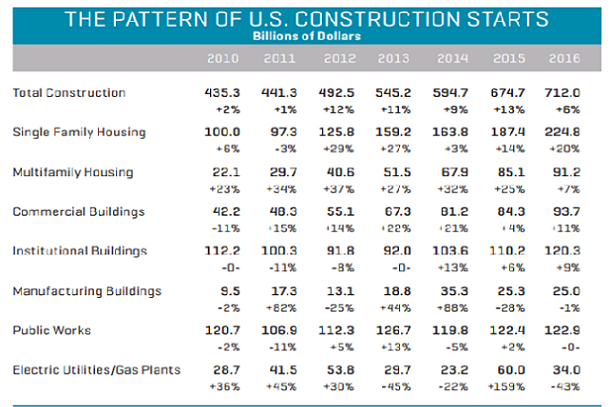 This would extend a positive trend over the past few years, coming on the heels of a 9% jump in 2014 and an estimated 13% upswing in 2015. Much of the gains over the past 12 months can be attributed to the start of several large liquefied natural gas terminal projects as well as a strong performance from the residential sector. Broken down further, predictions for 2016 encompass increases in residential building (16%) and nonresidential building (9%), while the nonbuilding sector is projected to decrease 14%.

Chief Economist for Dodge, Robert Murray, is optimistic that residential construction will be a key contributor to the health of the industry as a whole, with single family housing leading the way. Access to home mortgages is improving and decreases in unemployment will inspire more citizens to purchase houses in 2016, resulting in a 17% increase in starts (805K units) and a 20% rise in dollars to $224.8B. Multifamily housing will experience less robust growth but will continue to progress with 5% and 7% jumps in dollars and units, respectively.

Commercial buildings are projected to expand by 11% to $93.7B in 2016, and office construction will be at the head of the pack. Following a disappointing 2015 that saw an 8% decline in starts, the office sector is projected to come roaring back in the coming months with a 17% boost in starts totaling 117M sq. ft. Retail construction is also expected to rebound from poor performance in 2015, going from -5% to +9% starts with an addition of 120M sq. ft. in stores and shopping centers. After four years of steady growth, warehouse construction took a step back in 2015, with starts falling by 7%; however, 2016 will see a return to form and an 8% jump in starts translating to 177M sq. ft. in new storage space.

Rounding out the commercial sector is hotel building, which had a great 2015 (+18% starts and 68M sq. ft.). Although Dodge doesn’t foresee 2016 to be another banner year, 4% expansion and another 71M sq. ft. is still promising. However, it should be noted that Dodge’s assessment comes with a big caveat: “after five years of consecutive gains the hotel market may be nearing its peak for this business cycle.”

Rising 9% to $120.3B, institutional construction will be led by transportation terminal projects (+17% starts and 24.8M sq. ft.) spurred by various public-private partnerships and expected infrastructure funding from Congress, amusement/recreational buildings (+15% and 52.7M sq. ft.) driven by continuous improvement in the economy, and educational construction (+9% and 138M sq. ft.) generated by expanded enrollment and demand for new facilities. Dodge predicts modest gains for public construction following eight consecutive years of decline, forecasting a 3% increase in starts and the addition of 15.9M sq. ft. of courthouses, police/fire stations, and other administrative offices. Starts for religious buildings are also anticipated to grow by 3% (9.6M sq. ft.) based on recent upswings in charitable giving. Healthcare construction will essentially remain stagnant, with a 1% bump in starts estimated and 69M sq. ft. added.

The recent decrease in oil prices delayed or stopped several energy-related projects in 2015, leading to a 22% reduction in starts and a 28% drop in dollars spent. However, Dodge believes oil prices will stabilize and create a mildly improved climate for manufacturing construction to drive starts to expand 5%, which will add 63M sq. ft. in production space. Spending will ultimately fall short by approximately one percent, contributing $25B to overall construction economic performance versus $25.3B in 2015.

As a whole, the public works sector looks like it will remain flat at $122.9B in total spending. Delving further into the numbers shows clear winners and losers within key public works segments such as environmental projects and highway/bridge construction. Environmental programs spanning dam and water resource building as well as sewer construction are expected to deliver slight growth in 2016 (+4% and $35.1B).

On the other hand, highway and bridge projects are supposed to decline by 4% to $62.8B due to the fact that Congress has been unable to agree on a long-term solution for the Highway Trust Fund. Dodge’s analysis also noted that even if leaders in Washington finalize a deal for multiyear funding, that money will not reach projects immediately. 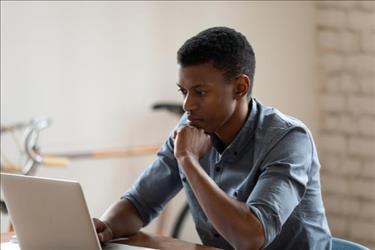 How Can Recent Grads Find a Job During These Unprecedented Times?

How can new graduates navigate today's unprecedented challenges and find an internship or entry-level job? These tips will help you land that first opportunity.

What Is a Talent Pipeline (And How Do You Join One)?

Quiz: Are You Ready to be a Boss?